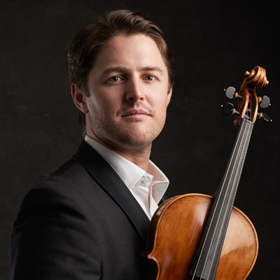 Tom Higham began his musical studies on the piano when he was five, before taking up the viola aged nine in Western Australia. He switched his focus to the latter instrument during high school and later completed his Bachelor of Music at the University of Western Australia (UWA) in 2010. Tom moved to Melbourne to continue his studies at the Australian National Academy of Music (ANAM) from 2011-2013, under the tutelage of Caroline Henbest and Chris Moore, before returning to ANAM in 2014 as a fellow and presenting a series of solo and chamber recitals throughout the year.

Tom has been a keen chamber music advocate, twice winning the Margaret Bello Prize for Chamber music during his time at UWA, as well as the Flora Bunning Prize for Chamber music, and was a recipient of the Edith Cowan prize in music for outstanding performance results (2010). Tom played a part in the inaugural Quartetthaus season at ANAM in 2011, performing Ligeti’s string quartet number 1 and Sibelius’ string quartet ‘Voces Intimae’ Op. 56. He was also a member of the winning group at the annual ANAM chamber music competition in the same year, again performing Ligeti’s first string quartet. In 2012 he was part of the national “Conversations with Ghosts” tour, a song cycle written by Paul Kelly, James Ledger and Genevieve Lacey, which in 2013 won an ARIA award for Best Original Soundtrack/Cast/Show Album, and toured for a second time that year. Tom has worked with the Fremantle Chamber Orchestra, the WA Philharmonic, the Perth Symphony Orchestra, the Tasmanian Symphony Orchestra and the Melbourne Chamber Orchestra, and regularly plays as a casual member with the West Australian Symphony Orchestra, Orchestra Victoria and the New Zealand Symphony Orchestra.

Tom has performed in masterclasses for British violist, Lawrence Power and principal violist of the Vienna Philharmonic, Toby Lea, as well as members of the Takacs, Brentano, Doric, Carducci and Brodsky string quartets. He has also performed chamber music with Johannes Moser, Nicolas Alstaedt and Anthony Marwood, as well as stadium concerts with the likes of Adele, John Farnham, Olivia Newton-John, Andrea Bocelli, Chrissy Amphlett and Aled Jones. In 2013, he was principal viola with the Australian Youth Orchestra for both it’s February season and it’s international tour of Europe under the baton of maestro Christoph Eschenbach. In the latter part of 2013, Tom was a member of The Melbourne Ring Orchestra for Opera Australia’s world premiere production of Richard Wagner’s epic Der Ring des Nibelungen, which played three full cycles to sold-out audiences in November and December. In 2015, Tom toured Australia with the Kammerphilharmonie Köln as principal viola, playing to audiences throughout regional South Australia, New South Wales and Victoria, as well as their respective capital cities. In 2016, Tom was again a member of the Melbourne Ring Orchestra, before going on to tour with London Grammar (UK) for the 16/17 Falls Festival across Australia. Tom is delighted to be returning to the Mackay Chamber Music Festival for its second year and will perform multiple programs with the Melbourne Chamber Players as part of their 2019 season.