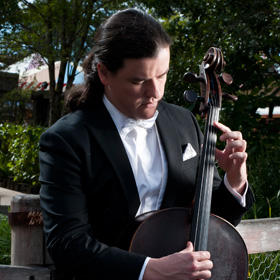 Simon is a graduate of the Queensland Conservatorium (2000) and the Australian National Academy of Music (2003). Since that time, he has been a frequent guest performer with London's Philharmonia Orchestra, the Bournemouth Symphony, Denmark’s Esbjerg Ensemble, the London Philharmonic Orchestra, and as guest principal with the Tasmanian and Singapore Symphony Orchestras. He has performed as principal cello and chamber musician at, among others, the Aldeburgh, Pacific and Salzburg Music Festivals.

In 2016, Simon was awarded the Adelaide Critics Circle Prize for his performance of the Elgar Cello Concerto with the Adelaide Symphony Orchestra and Michael Stern. He made his first appearance as soloist with the ASO in 2015, and appears again in 2018 performing Saint-Saëns Cello Concerto in A Minor. In previous years he performed as soloist with the Malaysian Philharmonic, the Queensland Symphony Orchestra, Camerata Queensland, Sydney’s Metropolitan Orchestra and Orchestra Victoria.

Recent highlights include guest performances with the Australian String Quartet at Ukaria, the Tinalley Quartet at the Coriole Festival, Tchaikovsky’s Souvenir de Florence with Pinchas Zukerman and friends, and as guest Principal Cello at the Singapore International Piano Festival with Martha Argerich.

Simon is passionate about education, and has taught at the Elder Conservatorium and the Queensland Conservatorium. He studied with Matthew Farrell, Janis Laurs, Alexander Baillie, David Strange and Michael Goldschlager. He plays on a beautiful English cello made in 1840 by Thomas Kennedy. In his spare time, he loves to cook.