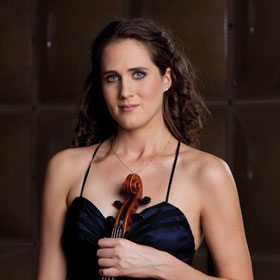 Violist Stefanie Farrands has been Principal Violist with the Tasmanian Symphony Orchestra since 2015. She has studied in Berlin with renowned Violist Tabea Zimmermann at the Hochschule für Musik, Hanns Eisler Berlin and was the recipient of the Georgina Grosvenor Scholarship studying at ANAM in Melbourne with Alice Waten and Roger Benedict.

Stefanie has performed extensively throughout Europe, America, Asia and Australia both as a chamber musician and orchestral player, including playing regularly with some of the world’s most renowned orchestras such as the Berlin Philharmonic, the Chamber Orchestra of Europe and Camerata Salzburg. She has also been Guest Principal with the Strasbourg Philharmonic in France and Amsterdam Sinfonietta in the Netherlands.

Stefanie plays regularly with Chamber Groups based in Europe such as the Noga Quartet and chamber orchestras such as Spira Mirabilus (Italy) and Le Concert Olympique (Belgium). In 2018 she also performed in the inaugural chamber music concert series ‘Concerts Sans Frontières’ in Paris, performing alongside some of Australia’s finest chamber musicians and has also performed at the Aspen Music Festival in Colorado, USA as well as other festivals around the world.

Commissioning new works for the Viola is of keen interest to Stefanie. In 2016 she was the winner of the Freedman Classic Fellowship from which she has commissioned numerous new works for the viola. She has premiered Douglas Weilands third string quartet with the Hamer Quartet as well as given premiers to numerous solo, chamber and orchestral works as well as workshops and masterclasses on writing for the viola.

She has recorded both solo and chamber works for the ABC and is regularly featured of ABC Classic Fm and 3mbs, and is currently a member of the Viola Faculty at the Conservatorium of music in Hobart.