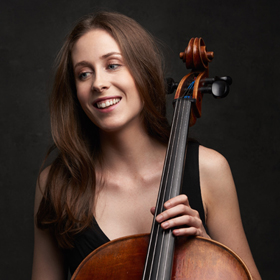 Born in Wellington, Alexandra Partridge completed a Masters of Musical Arts at the New Zealand School of Music. During her time there, she was the recipient of numerous scholarships and awards including the Barbara Finlayson Trust Scholarship and the NZ School of Music Director’s Scholarship. After completing three years of study at the Australian National Academy of Music in Melbourne with Howard Penny, Alexandra won a position with the Hyogo Performing Arts Centre Orchestra in Osaka, Japan.

Alexandra has been an Australian Chamber Orchestra Emerging Artist, allowing her the opportunity to travel across Australia performing with leading international artists such as Pekka Kuusisto, Malin Broman and Meta4. Alexandra also successfully auditioned for the Mahler Chamber Orchestra Academy program and played under conductor Daniel Harding in Germany.

A devoted chamber musician, Alexandra toured with Chamber Music New Zealand in 2017 across Australia and New Zealand as a member of a piano quartet formed by Wilma Smith. She was a finalist of both the 2014 ANAM Chamber Music Competition and the Great Romantics competition at the Melbourne Recital Centre with the Queensbridge Piano Trio. Alexandra was also a finalist of the same Recital Centre competition playing the Dvorak Cello Concerto in 2016. Other solo engagements include performing the Elgar Concerto with Manawatu Sinfonia and the Saint-Saëns Concerto with the Kapiti Concert Orchestra.

From a young age, Alexandra has been passionate about orchestral playing and is a past principal cellist of the NZSO National Youth Orchestra. She is also a casual player with the Australian Chamber Orchestra, Opera Australia Orchestra, Melbourne Symphony Orchestra, Melbourne Chamber Orchestra and New Zealand Symphony Orchestra. Alexandra has participated in masterclasses with the Borodin String Quartet, the London Haydn Quartet, Torleif Théeden, Marko Ylönen, Tim Hugh, Lynn Harrell and Clive Greensmith.